Gerard
December 2013 edited December 2013 in Trivia & Games Posts: 5,090
In the fifty-one years that movie Bond has been active, there have been lots of references in various places about the titles of his movies. The aim of this thread is to list the most titles that "tributed" James Bond over the years, in various countries. And I will begin by mine, France.

After that, other people jumped on the "Bons Baisers..." badwagon, and we saw "Bons Baisers de Partout" (Frome Everywhere with Love), a radio serial featuring the comical adventures of a group of secret agents, with lots of puns (given that the writer, and main actor, was Pierre Dac, it was expected), "Bons Baiser, à Lundi" (Till Monday, with Love), a gangster movie by Michel Audiard, and the infamous "Bons Baisers de Hong Kong", starring les Chrlots, Bernard Lee, Lois Maxwell, Clifton James, Mickey Rooney, and Her Majesty herself (she never knew) and her double, Huguette Funfrock. During my time in Germany, I discovered that FRWL was translated as "Liebesgrüsse aus Moskau", and that Bruce Lee's second movie, "Fist of Fury/The Chinese Connection" had received the german title "Todesgrüsse aus Shanghai".

A french/belgian parody of James Bond, Steve Pops, a british secret agent whose beard had a very rapid growth, and who had a very sweet tooth, appeared in the 60s in two graphic novels, "Steve Pops contre Dr. Yes", and "Opération Éclair". The second is notable for being a pun. "Éclair" is the french name for flash, but also the name of a pastry, which, given Steve's fondness for cakes of all descriptions, fits him perfectly. 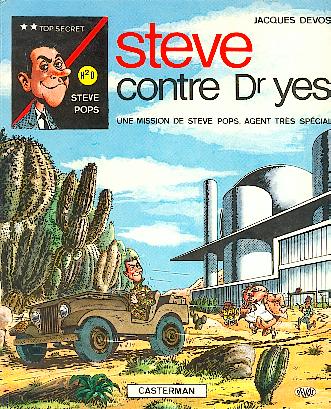 In France, the title for "You Don't Mess with the Zohan" is "Rien que pour vos Cheveux" (For you Hair only)

Of course, we have Austin Powers to thank for "The Spy who Shagged Me" and "Goldmember". Or maybe not.

Other variation of TSWLM, "The Spy who Laughed at Danger", the "movie in a movie" filmed in the Burt Reynolds vehicle "Hooper".

And the Israeli recreation of the famous raid on Entebbe, Entebbe : Operation Thunderbolt, but I don't think it really counts, as it was the real name of the operation. Still, a french cinema magazine thought it was the James Bond movie when it aired on french television, and advertised it as such (I was disappointed it turned out not to be the case, as it could have been the first time an official Bond movie aired on french TV)