Which Bond film is the most intellectually and/or emotionally engaging? 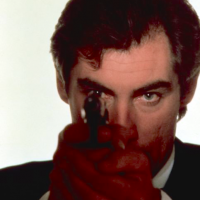 Milovy
August 2016 edited August 2016 in Bond Movies Posts: 676
There's so much breaking down of Bond films into formula elements in the fan community, and it gets a bit old, so I thought I'd ask about how we experience the films in a more meaningful sense. Just what it says in the title: which Bond film do you find the most intellectually and/or emotionally engaging?

For me, The Living Daylights is top in both categories. It's basically down to the Bond/Saunders relationship, with an assist from Kara. How Bond and Saunders come to respect each other, and then Necros offs Saunders to spur Bond into action, because Bond's been too busy wooing Kara. The contrast between Bond and Saunders is so entertaining, and seeing them finally get on the same page is so satisfying. And then Bond getting lost in romance, not aggressively pursuing his assignment, is a great encapsulation of the reason Bond doesn't get close to women: getting too close can bring harm to the people around him. That's the intellectual bit. Then there's the emotional: Saunders' grizzly death... Bond pulling a gun on a kid and his mom... the tragic, helpless, raw sound of John Barry's "Murder at the Fair." I find it all very affecting. And there's so much more that gets me, too: Bond's revulsion with shooting the woman sniper. Barry's bittersweet love theme. Bond brutally ripping the bathrobe off Pushkin's girlfriend. I could go on.

Runners-up include Casino Royale and Skyfall. CR has the double-wallop reveal that Vesper was a traitor and also still had another boyfriend, which raises so many questions for Bond (when was Vesper turned? was she just using Bond, or did she love him? did she still love her boyfriend as well?). Of course, viewers can suss out their own answers to these questions based on events in the film, and some answers come easier than others. But I find the ambiguity more interesting. As for Skyfall, it's satisfying to think about the film's ideas - it has some rich ideas - but I find the film itself a bit undercooked.

Now it's your turn. What do you think? (Feel free to discuss mainly which films you enjoy intellectually and/or emotionally - I'd like to celebrate the series' successes here, rather than dissect its failures.)
«1234567»