'Skyfall' re-ignited me as a fan. What about you?

Gustav_Graves
August 2013 edited August 2013 in Skyfall Posts: 11,119
I don't mean this as a joke. I have been a huge Bond fan ever since my dad brought me to cinema to see 'Licence To Kill'. But for me, 'Skyfall' made me an even more nerdy Bond fan than I already was. Some examples:

--> It's August 2013 now, but I don't get bored of 'Skyfall'. I keep re-watching it at least once a month. Especially since I bought the Daniel Craig Bond-trilogy on BluRay. 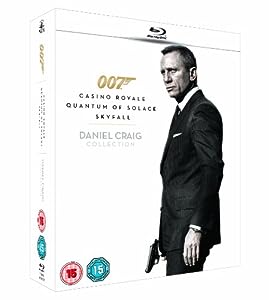 --> Ever since 'Skyfall' premiered I just keep posting and posting topics in this forum. I can't recall visiting this forum as much as I did in the past. I'm still 'hooked' to the MI6-forums.
--> I have been buying so many Bond related stuff in the past months, including books like 'James Bond: 50 Years of Movie Posters' (DK Publishing), 'The James Bond 007 Archives' (Taschen Publishing), 'LIFE Magazine: 50 Years Of James Bond' (by all editors of LIFE Magazine) and 'Bond On Bond' (written by Sir Roger Moore).
--> Ooowh, and don't forget....I have bought the DVD's 'Top Gear: 50 Years Of Bond Cars' and 'Everything Or Nothing', the documentary.

One could say, this newly ignited 'fan craziness' is because of the 50th anniversary jubilee. But to be very honest, it always come back to 'Skyfall', my favourite Bond film I have ever seen since I went to the cinema seeing 'Licence To Kill'.
«1234567…14»