historical: (in heraldry) an ornamental device representing a name as a pun

A rebus (ˈriːbəs) is a puzzle device that combines the use of illustrated pictures with individual letters to depict words and/or phrases. For example: the word "been" might be depicted by a rebus showing an illustrated bumblebee next to a plus sign (+) and the letter "n". It was a favourite form of heraldic expression used in the Middle Ages to denote surnames.

MORE:
For example, in its basic form, three salmon (fish) are used to denote the surname "Salmon". A more sophisticated example was the rebus of Bishop Walter Lyhart (d. 1472) of Norwich, consisting of a stag (or hart) lying down in a conventional representation of water. 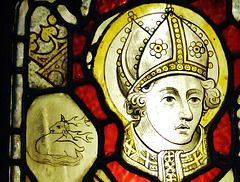 The composition alludes to the name, profession or personal characteristics of the bearer, and speaks to the beholder Non verbis, sed rebus, which Latin expression signifies "not by words but by things" (res, rei (f), a thing, object, matter; rebus being ablative plural).

Rebuses are used extensively as a form of heraldic expression as a hint to the name of the bearer; they are not synonymous with canting arms. A man might have a rebus as a personal identification device entirely separate from his armorials, canting or otherwise. For example, Sir Richard Weston (d. 1541) bore as arms: Ermine, on a chief azure five bezants, whilst his rebus, displayed many times in terracotta plaques on the walls of his mansion Sutton Place, Surrey, was a "tun" or barrel, used to designate the last syllable of his surname. 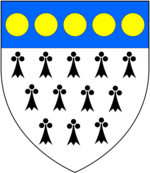 THE CHALLENGE: Concepts welcome, PM me with a description and I can put it together and host an image.

Expect the obvious to the obscure. Repeats are fair game.

Roll-up of contributions so far:

Up in the hills down there - p. 15 RichardTheBruce