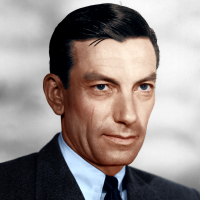 moneyofpropre2 France
March 2022 edited March 2022 in Bond Movies Posts: 829
I open a thread for imagining some concept for gadgets for James Bond, and imagine clever way to use it. It could be hard to imagine new gadgets in 2022 when our cell phones are already one their own and good ideas have already been used in previous games/movies.

So with what we could come up?

While waiting your ideas, some things I imagined back in the day (was for a video game, but work for films too).

- A mini flying drone in the shape of a dragonfly (or other insect). Would thus allow to gain height to study the location of the guards/patrols, self-destruction function with C4.

- You can hardly escape it: a telephone. To hack stuff with a mini-game, see the screens of hacked surveillance cameras, or see the camera of the mini-drone, take pictures, amplifier to listen to conversations from afar. It would also be the pause menu (review information, objectives, inventory, etc.). We could also change this: at the time Bond was the king of the gadgest so replacing the phone with a connected watch would not be totally wrong and it's quite astonishing that Bond never had one (I guess the money dropped by Omega and purist fans of needle watches have hitherto prevented an evolution that would had been so logical in Roger Moore aera).

- Explosive breach charge: like the perk in Deux Ex which allows you to break a wall. Gadget used to destroy a wall (and therefore create an alternate path and eliminate what is behind). Detonator on the watch. At some point in the game, Q might give out an improved thermite (quieter) version.

- A one or two shot weapon that easily passes metal detectors or searches (sometimes it's the only one Bond can carry/keep). We can imagine a fountain pen where the projectile is the feather that is propelled like a bullet or even a blowpipe disguised as an electronic cigarette (I like the fact that it reconnects with the smoking Bond).

- A pen that turns into a telescopic baton.

- A gadget that allows you to unlock doors with a small game of picking. Could lock some too (limit to one use so as not to abuse it, locking melts the device): it would be fun in pursuit of locking a door and forcing opponents to either destroy it with their weapons or bypass to enter through another door.

- A gadget that makes noise to distract/attract enemies.

- Sun glasses which hide night vision and thermal vision, see X-ray (in Hitman there is a function to see through walls, here is what would make this kind of function for assisted players more "acceptable"), protect against flashbangs. (Can be used to cheat in the casino by seeing through the cards of the adversary for those who have difficulty?). Sunglass could be remplaced by contact lens, with differents color (when night vision is activated, Bond eyes looks greens for exemples).

- Kevlar tuxedo/suit (reduces the number of damage per bullet).

- In Goldfinger, Fleming writes that Bond carries a knife hidden in the heels of his shoes. Perhaps it would be good to provide Bond with a blade (hidden for example in the belt, the belt buckle)?

- In a mission that requires an assault, Q could provide a Cornershot for Bond (see how this could fit into the controls of a video game).

- Laser projection keyboard (the interest is very limited so apart from just being used in a cutscene I don't see what we could do with it, but it would look a bit classy to see this kind of keyboard in a cutscene).

- Cufflinks (there's definitely something to do with it, like a grenade).

- Strobe light mounted on a rifle/pistol (should be limited to a few seconds of use because of the health effects, like if it say it uses a lot of battery, but it might be nice to have one on one occasion or find yourself facing opponents equipped with it).

- In the non-usable gadgets category, it might be nice that in Q-lab we can see technicians or Q himself working on gadgets for women: lipstick which turns out to be a switchblade knife, radio powder compact, flamethrower perfume, submachinegun hair dryer, explosive pads, handbag equipped like the case of FRLW...

And of course there is some car gadgets, like a front grapling-hook that can be shoot fast to, or a gadget that drop/break the front glass and make appears from above the hood a machine-gun for the passager (James Bond Girl) to shoot like :

Also, I like this abandoned drone concept of NTTD : 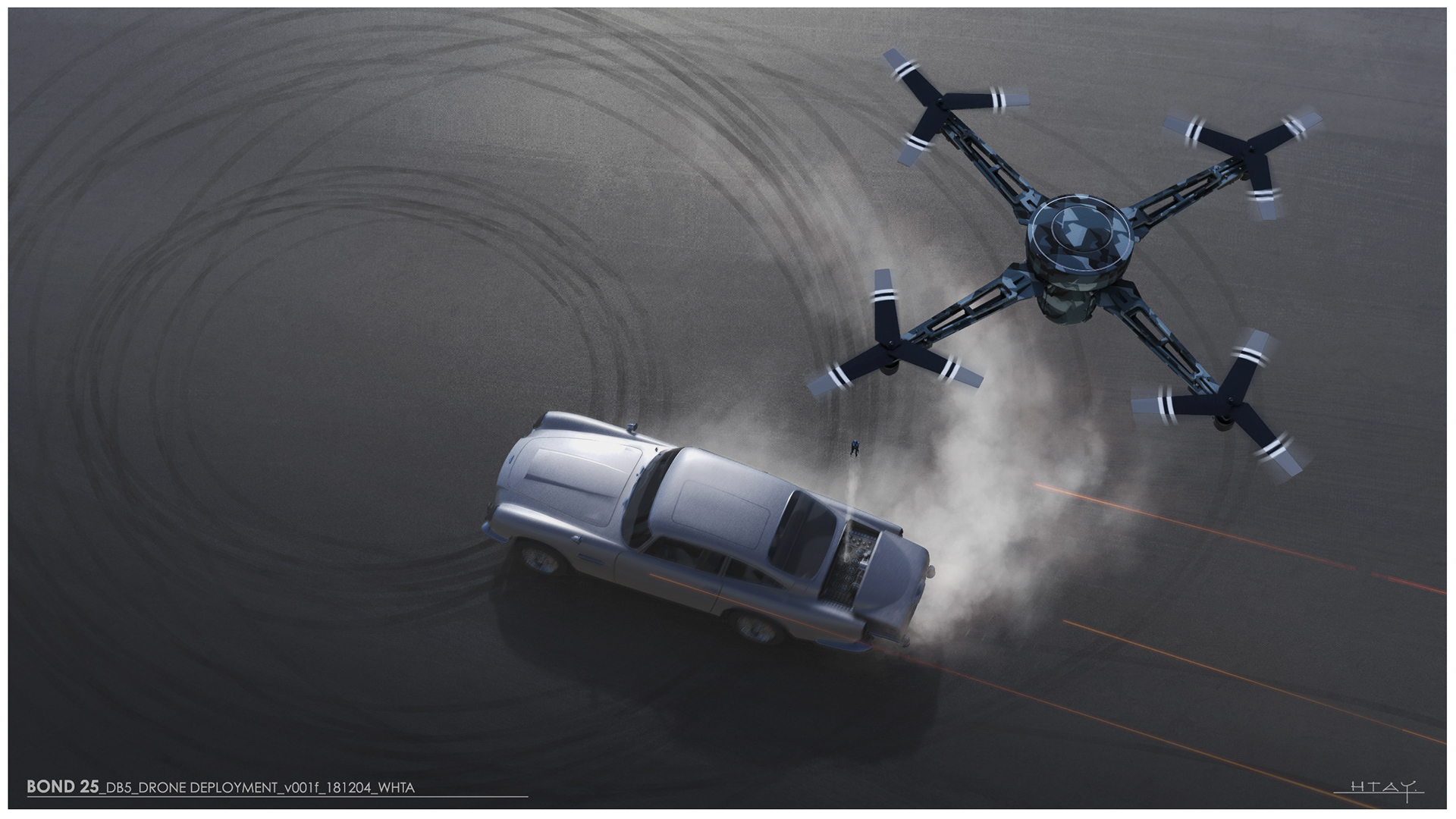 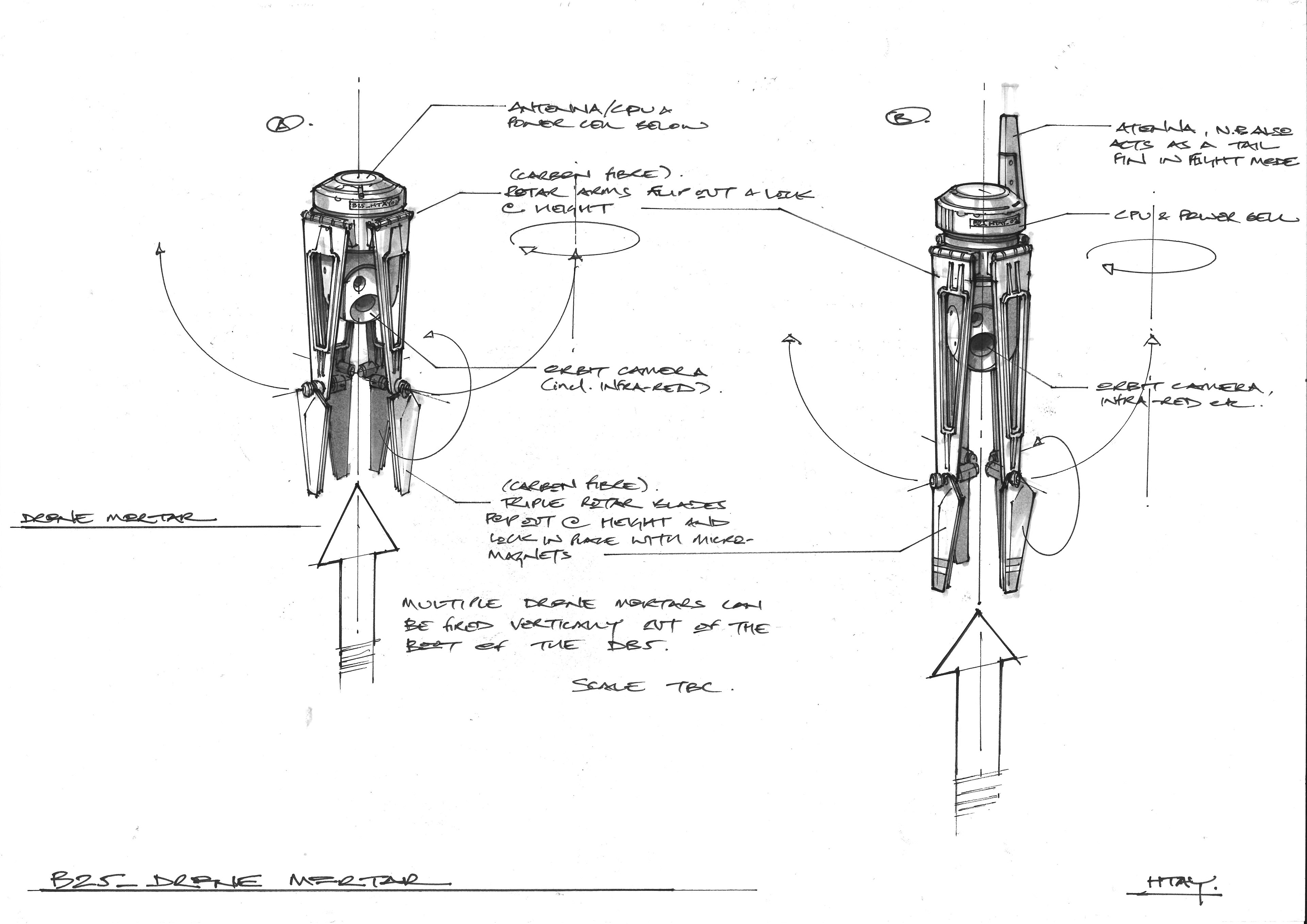 If in mid-air the drone can restract its wings (like as it firing state) and transform to a propeled missile, would be the sommum of cool!
«12»