The Controversial Mathis Death Scene in Quantum of Solace (2008)

Dragonpol Writer @ http://thebondologistblog.blogspot.com
March 2013 edited April 2013 in Bond Movies Posts: 15,393
This thread is about a very specific scene in Daniel Craig's second James Bond film Quantum of Solace. It relates to James Bond's treatment of Rene Mathis in the film in the scene where Mathis is shot dead by the Bolivian policemen. Please read the excerpt from an article I wrote on 'Cubby' Broccoli in 2009, where I deal with this very controversial scene in BOLD TEXT:

"Broccoli, Saltzman and the scriptwriters incorporated the more unpalatable elements of the Bond character in the first film Dr No, in the scene where Bond shoots Professor Dent once in the front and then once in the back with his silenced gun (“That’s a Smith and Wesson, and you’ve had your six”, says Bond[17]). Professor Dent had already emptied the chamber of his own gun into Bond’s mocked up bed, and director Terence Young’s “preferred version had the unfortunate Professor being shot a further four times”[18] beyond the two shots fired by Bond in the finished film. Bond’s first screen kill was “cut down from the original at the behest of the censor.”[19] Although neither this scene nor the minor villain character of Professor Dent appeared in the original Fleming novel, of which the film is otherwise a faithful adaptation, it shows that from the very start the Bond producers were willing to follow Fleming’s advice of not always showing Bond in a heroic or particularly popular light. James Bond was first and foremost a government-sanctioned assassin with a licence to kill the enemies of the state in the line of duty, but he was conversely also a hero. Another clear example of this juxtaposition between the heroic, likeable Bond and the unappealing, cold and ruthless killer may be found in the most recent James Bond film, Quantum of Solace (2008), a post-Cubby Broccoli production, where Bond’s ally and friend René Mathis is shot and fatally wounded by enemy police officers. After a very poignant scene where Mathis’ life ebbs away in the arms of Bond, Bond takes his friend’s lifeless body and roughly places it onto a dumpster at the side of the road. Camille, his female ally, asks, “Is this the way you treat your friends?”, to which Bond replies that Mathis was “not the sort to care”.[20] As Bond and Camille walk to their Land Rover and drive away, the director’s camera lens stays purposefully on the shot of Mathis spread-eagled atop the skip. The purpose of this approach appears to be to point out to the viewer, “What sort of a man is James Bond to do such a thing with his friend?” The silent lingering of the scene is one of the most powerful statements (and indictments) that the film makes of James Bond as a character, yet none of this should come as a surprise to the reader of Fleming’s novels, as Bond does sometimes do inexplicable, and seemingly uncaring and inhuman things in them. However, from a practical point of view, the viewer might also consider that Bond is too practical an agent in the field to allow the death of an ally and friend to alter his determination to see the job in hand through and it was perhaps neither the time nor the place to be distracted by a corpse or to be overly sentimental. Robert Harling, a friend and wartime colleague of Fleming revealed the possible source for Bond’s sometimes cold and unfeeling character in a television interview in 2002. Harling referred to how Muriel Wright, a wartime girlfriend of Fleming’s had been killed in an air raid and its subsequent effect on Fleming:

“I said to Dunstan [Curtis, of Fleming’s wartime 30 Assault Unit] that Fleming had gone off to identify her. I said he was so cut up. Dunstan said, ‘Well, you know that’s one of the troubles with Fleming. You have to get yourself killed before his emotions are involved.”[21]

In these examples from the Bond films, it is clear that the spirit of Fleming still lives on in the film series that Cubby Broccoli more than any other helped to initiate and sustain, even after the departure of his partner Harry Saltzman following The Man with the Golden Gun (1974). Broccoli recounted in his autobiography how Fleming continued his detailed description of the headquarters of the British Secret Service, and his recommendation that it be located “on the entire upper floor of a modern block of offices with shops below”:[22]

Now that you've read this excerpt, I'd really love to hear your views on the Mathis scene ansd what it tells us about Daniel Craig's interpreation of James Bond. Does it send out a good message etc.?

I've always meant to start a thread on this and I'd really love to hear your views on this very controversial scene from QoS., which can be viewed on You Tube here: 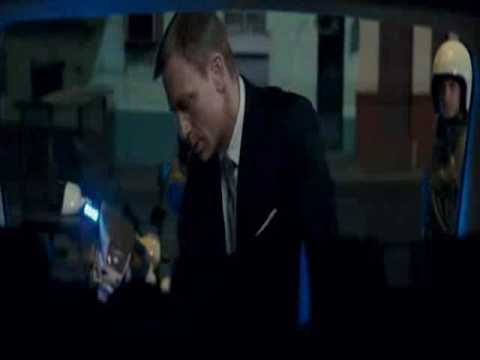 P.S. The full article can be read here: