Scars, deformities and disabilities - the future of Bond villains/characters 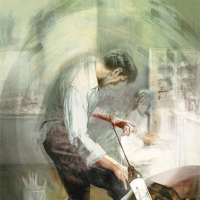 007HallY
April 2022 edited April 2022 in Bond 26 & Beyond Posts: 1,274
During the Craig era I've noticed there's been more of a tendency to have villains with some sort of outward scar or deformity. Of course, the Bond films have always had this to some extent (Pleasance's eye scar in YOLT, Largo's eyepatch in TB, Trevelyan's scars in GE to name a few) but it seems as if the trend has been emphasised during the past three films. Silva of course hid the effects of the cyanide on his face but it was still there/a direct part of his motivations, Blofeld in SP attained the Pleasance eye scar (kind of like Bond 'brought out' his inner evil by injuring him) and of course Safin had visible scars, and not unlike Silva the reason for them plays a direct part in his plan. Even Le Chiffre had a glass eye and scar.

Interestingly, having re-read a few of the Fleming novels recently, I was struck at how few of the villains had scars, disabilities or deformities. The obvious one is Drax, although I always got the sense that his distinctive traits were more his odd teeth, his hair/beard and the fact that he looks and acts like a caricature of an Englishman. Most of them are either simply ugly, overweight or have odd looking features. Largo in TB is even depicted as being handsome. When things like scars and eyepatches are given to characters it's usually to the Bond allies (Strangways, Leiter, even Bond himself with his scar. To a lesser extent there's also Honey with her broken nose). Most of the time these injuries are put down to being from the war or from a past mission or something.

Now, the world today is different to Fleming's post WW2 era. Scars and these sorts of outward injuries are perhaps less common and aren't seen as much as when young men were returning from war. That said, I've noticed a bit of commentary about this aspect of villains in modern Bond films and my questions are these: should future Bond villains subvert this current trend and do something different, how should they do this and could we even perhaps have a future Bond ally/Bond girl with some sort of visible scar or disability that's not depicted as villainous or making said character 'ugly'? Perhaps it's time to give Bond the facial scar from the novels?