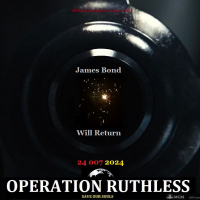 M_Balje Amsterdam, Netherlands
November 2021 in No Time To Die (2021) Posts: 3,848
Where do you see contribution of Phoebe Waller-Bridge in NTTD.

She is one of writers of Killing Eve and have seen her in movie with Roy (Tanner). Killing Eve have a lot of sarcasm and i think she was ask to at this to NTTD. In first place to inprove Blofeld.

Besides Blofeld i think she works on Logan Ash and Valdo. Mabey she also be responsible for scene that Safin let go Mathilde, because for a moment i expect we will found Mathilde death in the poisen garden.