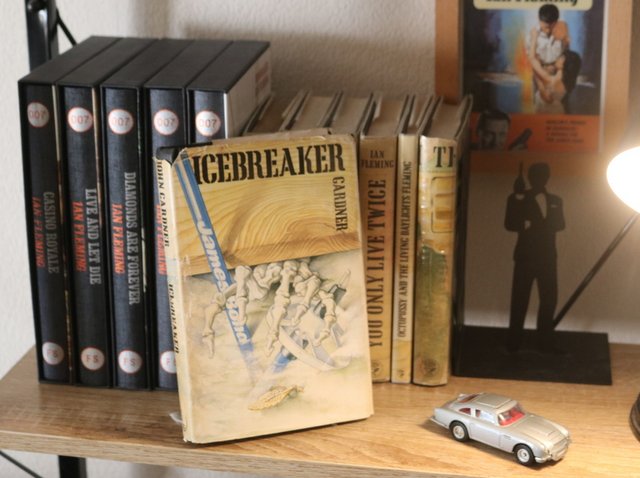 I was away camping this weekend and took with me a (rather battered) 1st edition of Icebreaker, the third John Gardner Bond continuation novel.
I chose Icebreaker because I’d been on my mind as people were discussing the title to the latest film. I’ve always loved that title, and with its double meaning I’d always thought it sounded very Bondian, so it was about time I read the book.
I’d only read one Gardner before, (No One Lives Forever I think, but it was twenty years ago), so it was certainty time for a re-visit to Gardner.
I really enjoyed it – with reservations. I enjoyed it quite a bit more than I expected actually, it was an easy read and well paced. Gardener certainly tried to keep close to Fleming’s Bond, whilst updating him for the eighties. The plot concerns an attempt to bring about the Fourth Reich, and operation ‘Icebreaker’ is the name of the team of international intelligence agents put together to foil the plot.
It’s funny, what might have felt ‘too modern’ for literary Bond in the early 80’s, now doesn’t seem nearly so modern, as we were still pre-internet and pre-mobile phone culture. In fact, there’s little in there to say it’s the eighties. And the Cold War element was still very much alive too.
I liked how Gardner subtly re-caps some of the previous chapters salient facts about some of the characters. When there’s lots of foreign names flying around, this is really helpful for the reader.
Only a few times did Gardner’s Bond do things that seemed odd for this Fleming fan. I’m not too worried that he drives a Saab, but would he really have christened it ‘The Silver Beast’?
Also, his love of jazz. Really? Is that in any Fleming book? I’ve missed it if it has.
The novel’s weak point for me, is the constant twists about the character’s allegiances. I’m afraid there as so many twists, it becomes comical. Paula is an ally, then she’s a villain, then she’s an ally again, and two other characters also switch allegiances twice. I know these type of twists are part and parcel of spy literature, but in this book, toward the end, it seemed like everyone was turning out to be the opposite of what you’re led to believe, and therefore, previous events had to be re-explained.
Also, there was one scene where Bond makes such a basic error of judgment, which is never explained. Are we to assume he just had a ‘stupid moment’? (The part in the hospital in the villains lair where he gives away official secrets without checking for listening devices first. Despite constantly checking for bugs in his hotel room earlier).
But it was a fun ride. Good villain, there was a great villain's lair in ‘The Ice Palace’, (where have I heard that before?). And I see from Raymond Benson’s Bedtime Companion that he rates Icebreaker as the lesser of the first three Gardener books, so that bodes well for future dipping into the Gardener Bond.
Any recommendations for the next Gardener Bond? Benson thinks that the novels got stronger after the first three, and suggest the next three are even better.