An Idea to Improve Safin's Plan 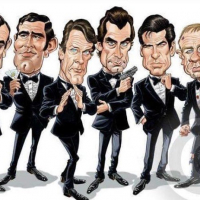 
On the whole, I enjoyed the film and think it is the best Bond since Casino Royale. I'd rate it 7 out of 10, if asked.

Yet this is just a scribble of an idea I had in an effort to change some things about the story I didn't think quite worked. Like the series, this post is just a harmless way to spend a few minutes and is only meant to entertain.

First off, it seems to me that the theme of the Craig era is grief and the illogical impulses this gives people: from Vespa's death at the end of Casino Royale, which defined Bond through Quantum of Solace; to Skyfall in which Silva grieves for his years of imprisonment and thereby causes the death of MI6 operatives and eventually M too. Not to mention Bond's visit to the graves of his parents in Scotland. In Spectre, you have Madeleine's reacting to her father's suicide, and Bond coping with M's passing by following her last instructions.

So to No Time to Die. I feel a problem with the story is Safin's lack of motivation in wanting to make the world "tidier" by killing millions of people. This has no connection to his crusade to avenge his family's death by killing Blofeld. In this respect, the genocide plot is very tacked-on to the film. An after-thought. It's almost as if Safin has just remembered he's a Bond villain and must have an evil plan.

Another issue is that he didn't kill Mr White - the actual person who killed Safin's family - in the thirty or so years before White's suicide in 2015.

Also, I feel that Bond's death was less a grand sacrifice than a weary admission that he was going to die anyway of the gunshot wounds.

Maybe a better idea would be to combine these issues in the following way:

It's unlikely that anyone other than MI6 and Spectre knew of Mr White's death. Maybe Safin still thinks he's alive somewhere. Say that Safin has been searching for him unsuccessfully for years (White is, after all, an agent of a large criminal organization that is so elusive that its very name suggests ghost-like intangibility).

Safin becomes so insane with grief that he finally decides to slaughter everyone in the world because he knows that White may still walk among them. He steals the nanobots.

(In this version, these don't need to be programmed with specific strands of DNA, though the physical effects and ability to kill is the same as what we saw in the film).

Safin loads the nanobots into missiles and sets them to launch on those cities. This will cause a global wipe-out.

"Every war has casualties," he says dismissively. The only survivor will be himself, alone, on his family's island.

After the song and credits, we still open with Bond in Jamaica, looking out at the water. He's alone, contemplative. And the rest of the film is the same, pretty much, until the last act.

Then Bond infiltrates the island and meets Safin.

Safin explains his wish to kill Mr White. Bond is surprised as he knows White is already dead. He saw White's suicide video in Spectre. He tells Q to upload the video to his phone and shows it to Safin.

Safin realises that his plan is without purpose - yet the launch of the missiles has already been set.

Bond and Safin must work together to stop this attack. For the first time ever, Bond and the bad guy will be working together on the same side.

Safin almost manages to prevent the strike but perishes in the attempt. Bond takes over, yet the only way to stop the genocide altogether is to detonate the missiles where they stand. This, however, will mean that the nanobots will attach themselves to Bond instead. It means, if he returns to land, he will be a walking weapon - a blunt instrument that will kill everyone.

On the phone, he tells Madeleine what he will do and what it means.

"I've had enough of destruction," he tells her. "Give me a license to prevent killing. So there can be a future. For my daughter. For everyone else. For all the reasons they have to live. This is no time to die."

He makes the detonation, becomes infected with nanobots.

The film ends with Bond on the island, unable to leave it, with only the prospect of air-dropped supplies for survival. Like his retreat to Jamaica after the title song near the beginning of the film, we see him staring at the ocean, thinking of all he has lost.

And the sun sets over him.

This is probably crappy fan fiction, but there we go. The film we got, in my humble little view, is better than the last three and the first hour, in particular, is among the finest in the whole series.