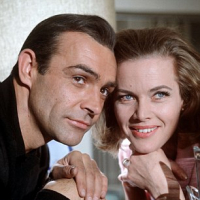 MakeshiftPython https://007homemedia.blogspot.com
October 2019 in Bond Movies Posts: 2,245
Title is fairly self explanatory. I was watching A VIEW TO A KILL recently and have always found the scene with Bond and Aubergine... odd, from start to finish. Right off the bat, the actor playing Aubergine seems to be playing him as a comically French stereotype. Bond isn’t noticing the commotion with May Day taking out the butterfly puppet master. Right before he dies, Aubergine refers to himself in a third person like he’s in some parody. Then of course May Day kills him with a poison coated fish hook butterfly to the face. All this is perplexing, but the strangest is what Bond says “there’s a fly in his soup”. Sure, Bond isn’t one to let an opportunity of spouting a one liner pass, but why over Aubergine’s expense? Usually that’s reserved for the bad guys, and it probably would have been funny with Bond killing a henchman at the table and cracking the line. Here it just seems like Bond’s being a dick.

My theory: Aubergine’s presence just makes people say and do weird things. Even M has a weird line like “what did you learn from Aubergine before his untimely demise?” which always struck me as an odd way of phrasing things, and rather something I’d hear on a satire. Then again, this is A VIEW TO A KILL, that indulges in weird touches like focusing on a street bum when Bond rescues Stacey.

I’m sure you all can share some one-liners you find off putting. Take for instance: every single one-liner Lazenby delivered in OHMSS. Every. Single. One.
«123»