toydejour
December 2014 in Merchandise Posts: 2
Hello! As promised in my introduction, I'm posting images for the unreleased James Bond toy line items I have for sale. The boxes are dated 2000 and the artwork used is from The World Is Not Enough featuring Pierce Brosnan. It's a pretty safe assumption that these toys were made to accompany that movie.

*MODS - If any part of this post is not allowed on the boards, please let me know and we can edit it so that it complies with board rules.* 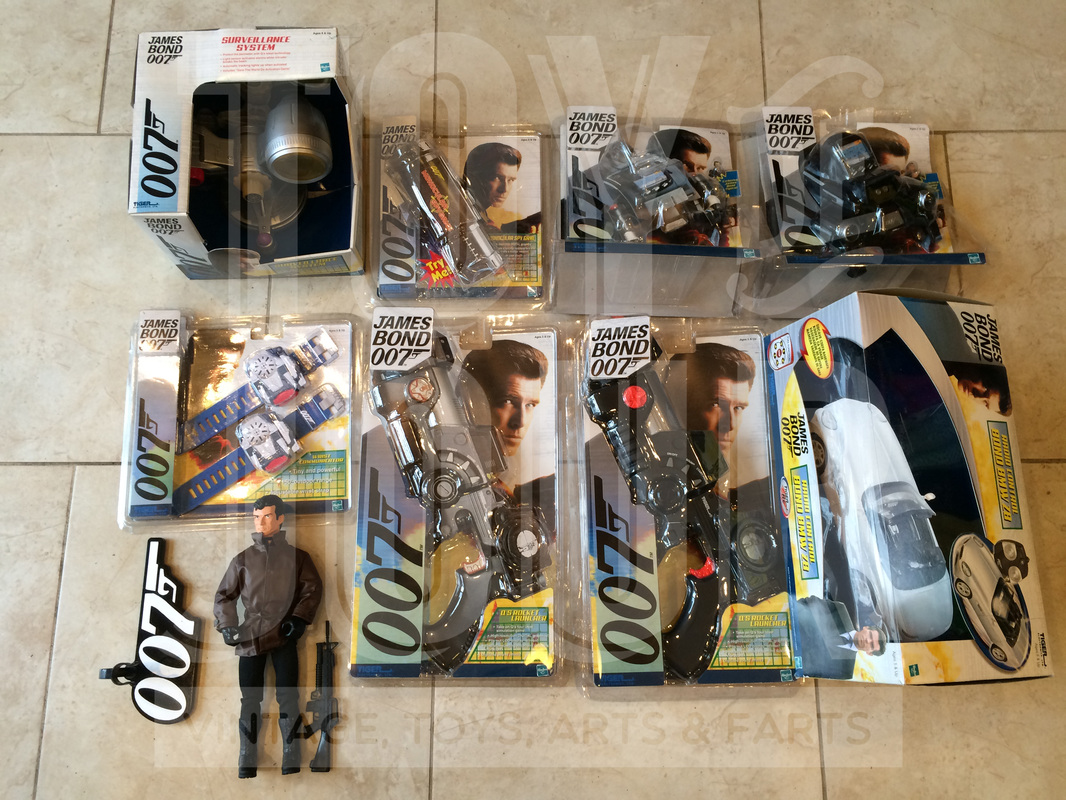 A quick background before going into the items themselves. I own a vintage toy shop in Chicago (Toy de Jour), I've worked as a vendor for Hasbro in the past, so I have friends that will from time to time send me items like this. I will not be able to reveal a name for the person that supplied these, even after the sale is made. You can check my eBay feedback for references and I will get more into my references at the end of the post.

These items were displayed at a Toy Fair, I believe either in 1999 or 2000 in hopes that major retailers would sign on and order the line. Apparently not enough retailers did that, so the line was scrapped and these are the only items that were ever produced. So while these would have been used internally at Hasbro/Tiger for pitch meetings and mocked up for the show, ultimately their fate was sealed by how many people gave interest during Toy Fair.

- Hand Painted 12" Pierce Brosnan prototype figure. This figure has unique clothes and a stand made just for him. The body of the figure I'm assuming is from a standard 12" GI Joe figure and would have been the same if it went into production. The head was sculpted and cast in a resin and then hand painted for this presentation. The head looks like it was glued on for display, but sits on the figure fine as-is because of the collar on the jacket.

- Packaging mock-up for a set of Wrist Communicators. There's a few packaging mocks in this lot. This is where a cardboard item takes the place of the actual item in the package as the real product hasn't been put into any sort of production or hasn't been mocked up or sculpted at this point. But the company still needs to show off to retailers what packaging would look like, both for esthetics as well as physical shelf space. You can tell that there's a lot of place-holder text on the packaging as a lot of it is just jibberish.

- A boxed Surveillance System. This would have been like the motion sensor room guards that a lot of toy lines get. Usually it's a character that when turned on and activated, will move and talk. This is a physical item but isn't a fully functional electronic piece. There's a sticker on the bottom referencing "Alan's meeting". The package also has a cardboard placeholder in there, I guess that it was made in case a physical piece wasn't done in time.

- Packaging mock up for the Bond BMW Z8 radio controlled car. This package has as cardboard placeholder of the car that was used in the movie and again, just there because no physical product was made by this point.

- Packaging mock up Monocular Spy Game. Looks as if it was to be another hand held game that the user would hold up to their eye to be able to see the electronic display screen. No product, just the cardboard placeholder.

- Powerboat Cockpit Game. This has both the physical item (no electronic working parts) and a packaging mock up with a cardboard placeholder. This was a handheld game in the shape of a powerboat. The package boasts about a mini figure and the one that has a physical product actually has this exclusive mini figure. This looks hand painted and most likely the original sculpt prototype.

This is a very amazing piece of history, all of these items are one of a kind and will be the crowing part of anyone's collection. Seeing a case with all of these all displayed is going to be very impressive, and hopefully whoever owns these eventually will share photos of them displayed with the group.

- I want to sell to one person. I'm sure there's pieces here that people specifically like (hell, I really like that 12" figure and understand not being able to afford buying it all to get one item), but I'm not going to manage and track multiple sales.

- I am taking offers. I'd prefer that you did that by emailing me directly at [email protected] and not in this thread.

- I will be posting this on a couple sites as well as on FB. I will not be taking the first offer, but I will consider any/all for a short period of time before deciding on a buyer. Obviously I want the most money for this that I can get, I'm not trying to hide that fact, so accepting the first offer would be a poor way of doing so. And I may not necessarily take the highest offer. Honestly the highest offer is probably going to come from someone overseas and I'd love for someone locally to walk in and buy them so that I don't have to ship. I'll be taking things like that into consideration along with amounts offered.

- Only serious offers will warrant a reply. This is a piece of history and I'm a dealer. I know the going rate for items like this so please don't waste my time with ridiculously low-priced offers. I will not give a starting price though, I apologize but again, I don't want to sell these pieces short and me putting a price on it may deter someone from offering what they think it's worth.

Please feel free to ask questions here, but know that questions just asking for proof of how I got these or the person's name that gave them to me are going to be ignored or rudely answered. :) I can't give any more info than I have here. If you don't think these items are genuine, then I agree that making an offer for them isn't for you.

But now onto my credentials, I am not currently selling on eBay, but you can check my user ID on there that has 100% positive feedback, over 1,700 transactions with feedback, a top-rated seller and at one point a power seller.

You can message me through there to get a response to make sure that it is actually my user ID.
I have traded on many toy message boards and groups on Facebook. I can give references there as well.
Lastly, I am a physical store. You can come talk to me and see the items in person if you're in the area. I'm not some guy listing stuff out of his basement or garage. My reputation is my store's reputation. I have no intentions on doing a bad deal and always do what I can to make people happy with their purchases regardless if it's a $3 Pokemon or a piece of film history like this.