PropertyOfALady Colders Federation CEO
September 2018 in General Discussion Posts: 3,529
I know most of you are European. But I thought it would be a good time to highlight one of the darkest days in American history.

I was only 6 on that Tuesday. But I remember it all very well. It started normally enough. Cereal for breakfast that day before going off to kindergarten class (reception school for those of you in Europe). Except that day wasn't normal at all. At 08:46:40 Eastern Daylight Time American Airlines Flight 11 (a Boeing 767) slammed into the North Tower of the World Trade Center in New York after taking off from Boston Logan International 47 minutes earlier (bound for Los Angeles). The impact was cought on camera by amateur filmmaker Jules Naudet, his being the only footage to document the event from start to finish. News networks rapidly switched from the planned interviews and instead covered the impact of flight 11, speculating that it was perhaps a wayward Cessna, and that the crash was an accident. With all cameras now aimed at the two towers, it was only a matter of 17 minutes before United Airlines Flight 175 (another 767, bound for Los Angeles) rammed into the South Tower at 9:03:02 after taking off from the same airport as American 11 at 8:14.

This was the one that was captured by the news cameras. The one you all know. I myself was still eating my cereal. My brother thought that it was a film, as perhaps all young people did. (It, to this day, gives me a horrible feeling to watch that film) My mom switched off the TV just then. I don't remember much of the ride to school that day, but I do remember that the staff at my school had the students of the kindergarten class all line up against the first grade (Year 2) lockers and told us of the news, while trying to (most teachers failed and cried) remain calm. We didn't get to watch any more of the news coverage that day at school. Loads of crying, and that heavy feeling of sorrow remained for the rest of the week. It was only when I got home that fateful Tuesday that I learned of American 77, and the heroic passengers of United Airlines Flight 93. American 77 (a Boeing 757, going to Los Angeles) had taken off from Washington Dulles at 8:20 and impacted the Pentagon at 09:37:46, while United 93 had left Newark International Airport, now Newark Liberty International (destination San Francisco), at 8:42, 41 minutes after push back due to congestion at EWR, and was brought down by the passenger and crew rebellion at 10:03:11 near Stonycreek Township in Pennsylvania. Sunday marks the dedication of the Tower of Voices monument at the impact site.

58.2 percent capacity, but higher than the average load factor for Flight 11 on Tuesday mornings of 39 percent in the months preceding September 11.

David Angell (creator ofFrasier) and his wife were onboard, as well as actress Berry Berenson, the widow of Anthony Perkins. Scheduled passengers that ended up changing plans at the last minute include Seth MacFarlane, Mark Wahlberg and Leighanne Littrell, wife of Backstreet Boys singer Brian Littrell.

33 percent load factor — well below the average load factor of 49 percent in the three months preceding September 11. Garnet "Ace" Bailey, the director of pro scouting for the Los Angeles Kings and a former National Hockey League player was onboard.

33 percent load factor. American Airlines said that Tuesdays were the least-traveled day of the week, with the same load factor seen on Tuesdays in the previous three months for Flight 77.

Notable passengers include Todd Beamer, "Let's roll!" (on the phone to Verizon GTE Airfone operator Lisa Jefferson), and Tom Burnett, vice-president and chief operating officer of Thoratec Corporation. The monument dedicated to him can be seen in the Mall of America, in Bloomington, Minnesota.

Death tolls, not including hijackers

I'd like to close this rather long-winded post by saying a simple "Never Forget". A sentiment that perfectly sums up what all Americans, and, heck, even Europeans should do.

I'd also be curious to hear what you remember about that day. 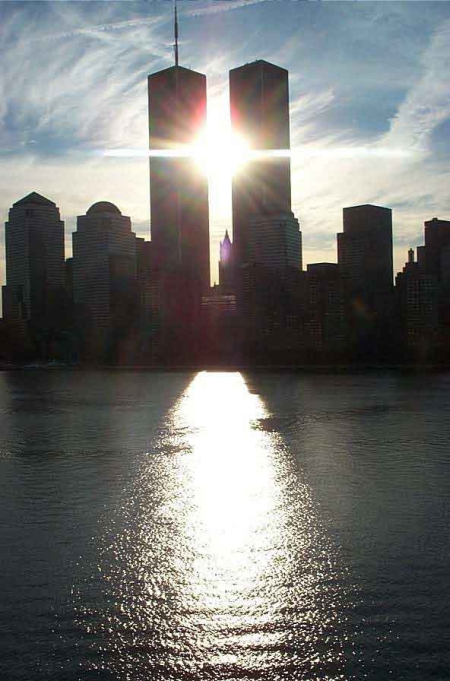