An unfinished history of all the James Bond Aston Martins

zebrafish <°)))< in Octopussy's garden in the shade
February 2014 edited March 2021 in Trivia & Games Posts: 3,567
A while ago I got confused about how many AM DB5's were actually used in each film and wondered where they are now.
Here is what I found out, cross-checked from various sources on the web (particularly knowledgeable are the guys posting on the forums at the Internet Movie Car Database - thanks!):

4 cars were used in "Goldfinger":
Chassis DP/216/1, Registration BMT 216 A (revolving plates: 4711-EA-62 and LU6789)
The "effects car", a DB5 prototype (hence the chassis number DP). Owned by Aston Martin and borrowed to Danjaq.
It was originally painted Dubonnet Red and actually appeared in episode 2.17 of The Saint with future Bond Roger Moore in 1964, before it was used in Goldfinger. Here's a screenshot: 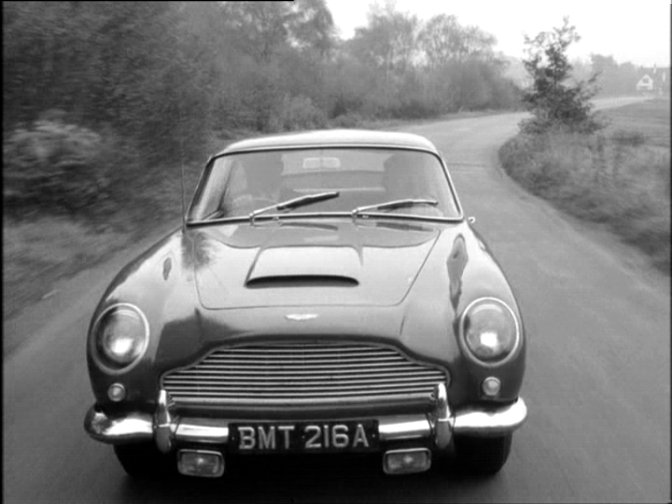 Fitted out with gadgets by John Stears for EON in January 1964, repainted to Silver Birch from Dubonnet Red → stripped in 1968 by Aston Martin, re-registered as Numberplate 6633PP and sold to Gavin Keyzar, who refitted it with fake gadgets in 1969 → owned by Richard Losee in 1981, used in "The Cannonball Run" in 1981 for interior and beauty shots → bought by Agent Robert Luongo for Pop Culture collector Anthony V. Pugliese III at Sotheby's auction in 1986 for $ 275 000 → stolen in 1997 from hangar in Boca Raton, Florida → Professional company "Art Recovery International" investigating the whereabouts of the car (as of June 2018), reward offered for tips leading to the recovery of the undamaged vehicle.

Chassis DB5/2008/R, Registration YRE 186H (revolving plates: JB007 and 007JB; probably altered at some stage to BMT 216 A and 4711-EA-62)
Fully fitted effects publicity car (1965, not shown in movie), → sold to Sir (now Lord) Anthony Bamford from EON in 1969 ($ 3750). He returned the car to the factory for service, and it received a host of freshening and mechanical measures → sold to Bruce Atchley and exhibited in Smokey Mountain Car Museum, Pigeon Forge, Tennessee → Auctioned by RM Auctions on 20.1.2006 in Phoenix Arizona for $ 2,1 million → private collection of Swiss businessman Thomas Straumann. 4-year restoration by Aston Martin Heritage Specialist Roos Engineering in Switzerland: chassis and body completely refinished to proper standards, all 13 of the Ken Adam–designed modifications properly refurbished to function as originally built, → for sale in February 2013 by RS Williams, Surrey, for £ 3,000,000. → Again for sale at RM Sotheby's auction in Monterey, Aug 15-17 2019. → Sold for $ 6,385,000 to an unknown bidder.
→ Easy to spot: White top rear lights, rear fog dispenser tube (and a dented rear bumper prior to recent restoration).

Chassis DB5/2017/R, Registration BMT 216 A
Fully fitted effects publicity car (1965, not shown in movie), registered under BMT 216 A, after DP/261/1 was reregistered → sold to Sir Anthony Bamford from EON in 1969 ($ 3750) → swapped to Sandy Luscombe-Whyte in 1970 for a 1964 Ferrari 250 GTO → sold to Frank Baker of Vancouver for $ 21600 in 1970, exhibited in Attic Restaurant Vancouver until 1983 → sold to Alf Spence → sold to Ernest Hartz Consortium, San Francisco, who sold it to racecar driver Bob Bondurant → sold it one year later to Robert Pass of Pass Transportation → sold it to Robert Littman, who parked it with a Jaguar dealership in New Jersey → sold it to Louwman collection, Dutch National Automobile Museum (Feb 2009 and still listed there)→ Auctioned in 2010 → current owner not known.

Chassis DB5/1550/R, Registration YHH 28 B
A fully fitted replica car that never featured in any of the movies. Was commissioned for an English orthodontist and displayed at the "Cars Of The Stars" Motor Museum in Keswick until 2011. Moved to the Miami Auto Museum at the Dezer collection, now fitted with registration BMT 216A.

3 cars were used in "Goldeneye":
Chassis DB5/2175/R
Was used for close-ups (in front of Monte Carlo casino) and interior shots. Currently at the Miami Auto Museum at the Dezer collection, registration JB Z6 007. Distinguished by the four screws in the headlamp bezels (instead of one in other cars).

Chassis DB5/1484/R
Stunt car, bought in poor condition and fixed up for filming by Stratton Motor Company, Norwich → failed to be sold at Coys auction on 21 March 1994 → current owner not known.

This car was used to promote the movie after filming had finished, following a final rebuild that "included removing the body from the chassis and refurbishing it with a new nose section, new tail section and new door skins, which was followed by a full repaint in the current livery. It is understood that Stratton also carried out considerable mechanical refurbishment at this time. In 1996, '1885/R' was sold to the immediately preceding owner, Peter Nelson, proprietor of the 'Cars Of The Stars' exhibition in Cumbria. When purchased at a Bond themed auction by the current owner in February 2001, this DB5 became the most valuable piece of Bond memorabilia ever sold and subsequently was recorded as such in the 'Guinness Book of World Records'. As a true James Bond DB5 it has brought with it unique experiences for the current custodian and his family, including attending Bond Premieres / after-show parties and even playing extras in the recent Spectre movie!
The DB5 has been well looked after, receiving occasional leisure use with service work provided by Aston Martin Works, RS Williams and Stratton Motor Company. The car featured in Chris Evans' Famous Five and Magnificent Seven car collection for BBC's Children In Need 2013 Appeal and has been on display as the star exhibit at the National Motor Museum, Beaulieu, as well as the key attraction of the 'Bond in Motion' exhibition at London's Covent Garden. " (Bonhams auction catalogue).
This car was sold at the Bonhams Goodwood Festival of Speed Sale on 13 July 2018 for £ 1,961,500 (€ 2,180,898). The estimate was £1,200,000-1,600,000.

One of the above cars was used for a brief scene in "Tomorrow Never Dies".

"Skyfall":
There is contradictory information on this one:
a) Chassis DB5/1484/R (one of the GE cars). Original registration AJU 519 B
b) Aston Martin Works transformed it from a green car (Chassis DB5/2007/R, original registration COJ 483C) with beige interior to Silver Birch with black trimming (from a customer whose car was waiting to be restored in the shop). The roof hatchline was painted on. Was displayed at the Beaulieu Motor Museum in November 2012 with its original registration → current owner not known.

"The Cannonball Run":
This movie used DP/261/1 (see above) as well as another car with a DB4 hood and right hand drive (the images were mirrored in the film, but wiper orientation is a giveaway) for stunt-driving.

If someone has more information on any of the cars above, or actually owns one of these, I would be more than happy to update this post!
«123»